Portraits of a Small Town

Judge James Howard witnessed many milestones during the early 1900s. As Anaheim's Justice of the Peace, he settled disputes and married young couples. Though Howard loved the law, his passion was photography. Proud families posed on the porches of their new homes for the judge's camera. He was a fixture at parades and picnics. During the Spanish-American War, he shot portraits of the young soldiers camped outside of Anaheim before they shipped off to the Philippines.

Howard's Studio & Darkroom
A room at the back of his Claudina Street home served as his studio and darkroom; an adjacent shed was his storage archive. From 1900 until 1918 the Judge documented Anaheim with nearly 1000 photos. As the years passed, fewer and fewer people called to get reprints. Within a few years of his death in 1947 they were forgotten - and they remained in the shed, abandoned for almost half a century.

"Everything was in individual boxes and stacked against the side of the wall like a cord of wood," says William Juenger. He and his wife Francis were cleaning the home in 1993 after the passing of her aunt, Adele Howard, Judge Howard's daughter. "I started digging into the shed and saw that a lot were damaged. Water soaked in over the years and a lot of the photos were peeling off the glass. A lot of the plates were stuck together, and some were just shattered. I wasn't sure there was anything that anybody would want." 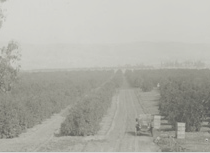 Artifacts from Anaheim's History
But it was indeed something that someone wanted. "It's an incredible find," says Jane Newell, Anaheim's local history curator. "It's like finding buried treasure in your backyard. Over the years, some of our patrons have donated prints made by Judge Howard, but to have the original negatives, in any condition, is even better. These are actual artifacts from Anaheim's history."

Donating the Collection
The Juengers donated the collection to the Anaheim Public Library, but the fragile condition of the plates prevented anyone from viewing them. A recent donation from the estate of Eloise Horn, a prominent resident, has funded the copying and printing of the negatives. The new prints are available for public view and research in the Local History Room of the Central Library.

Glimpse into the Past
The photographs provide a fascinating glimpse into Anaheim at the turn of the 20th century. "We'll be studying these for some time, and once we get a better understanding of their historical significance we'll have a show at Anaheim Museum," says Newell. "We're hoping that some of Anaheim's long-time residents will be able to identify the people and places in the photos. We're also fortunate to have Judge Howard's log books from which to work. This is where the detective work begins."

Dedicated Photographer
One negative that caught the eye of William Juenger was an aerial shot of Anaheim when it was a sleepy farm town. "I couldn't figure out how he got that high since it was shot before the invention of airplanes. Then someone said Anaheim had a tall water tower during that period. Judge Howard had 1 leg that was 4 inches shorter. It would have been difficult for him to climb the ladder, but that's the kind of photographer he was. He loved what he did and he was dedicated."