One of Anaheim's early community events was the Halloween Parade, inaugurated in 1924. From a modestly informal beginning, the parade grew into the "Greatest Night Pageant West of the Mardi Gras," and included specially designed floats, marching bands, equestrian units, children in Halloween costumes and a costume breakfast.

Celebrations in Anaheim
In its heyday during the 1950s, over 150,000 spectators lined downtown streets and another 7,000 more packed into La Palma Park grandstands to view the parade. While interest declined in the event during the 1970s and 80s, the parade's long-time popularity launched other festivals, including 4th of July and Cinco de Mayo celebrations, keeping the tradition of Anaheim's community spirits alive.

Even though most of the city's population had moved into Anaheim since 1950, their sense of civic pride was no less than longtime residents.

Marking the Centennial
The city marked its Centennial in 1957 with a year's worth of activities, culminating in a week-long "Centennial Celebration," which featured a beard contest, "Old Fashioned Fashion Show", giant square dance, time capsule burial in City Park and a grand ball with the coronation of a Centennial Queen. A highlight of the festival was the nightly performance of "Centurama", an elaborately staged pageant of Anaheim history with a cast of 1200 residents. 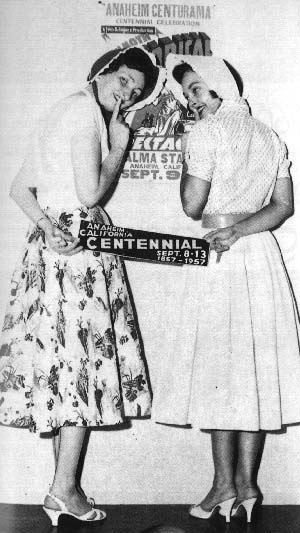