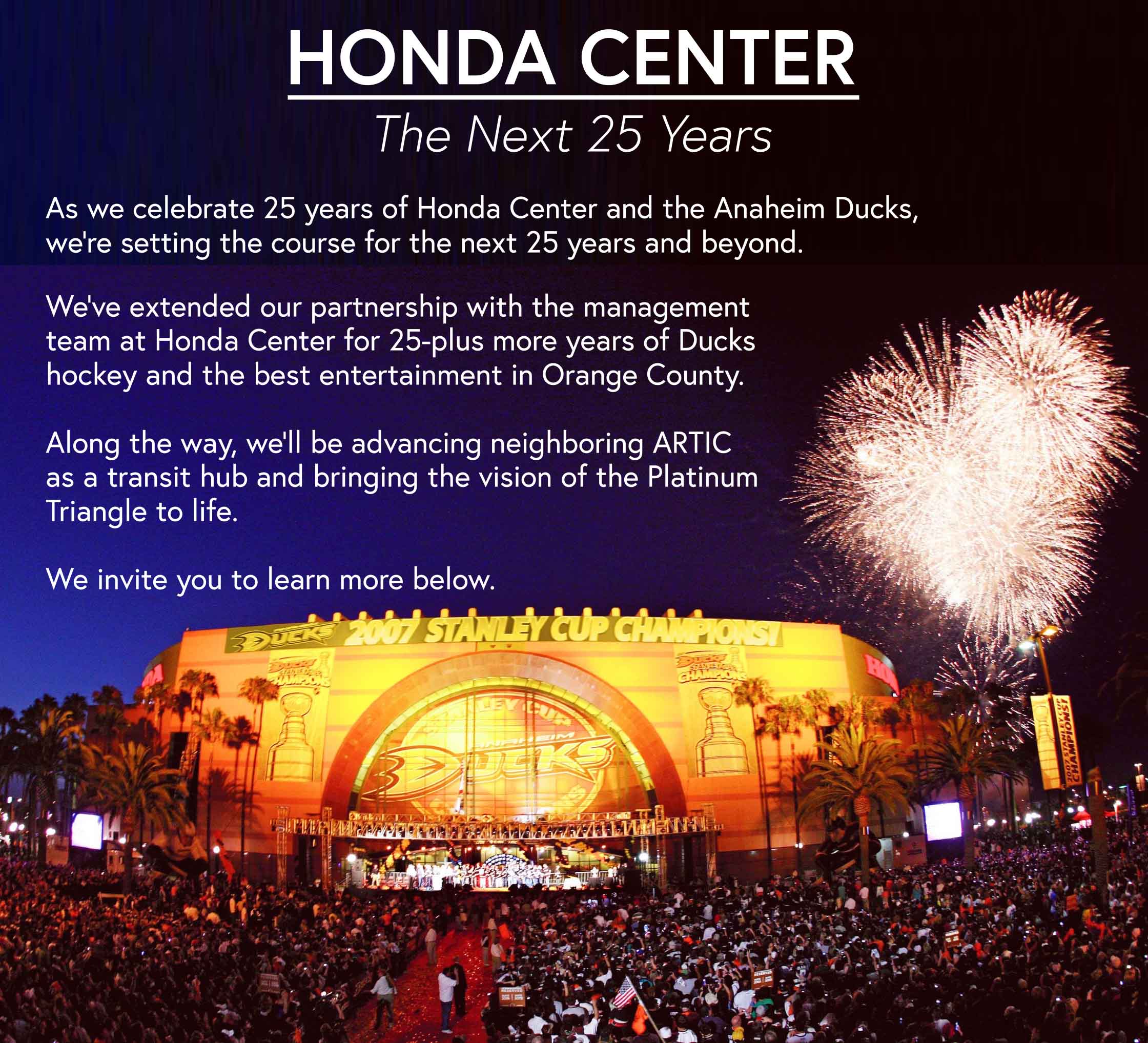 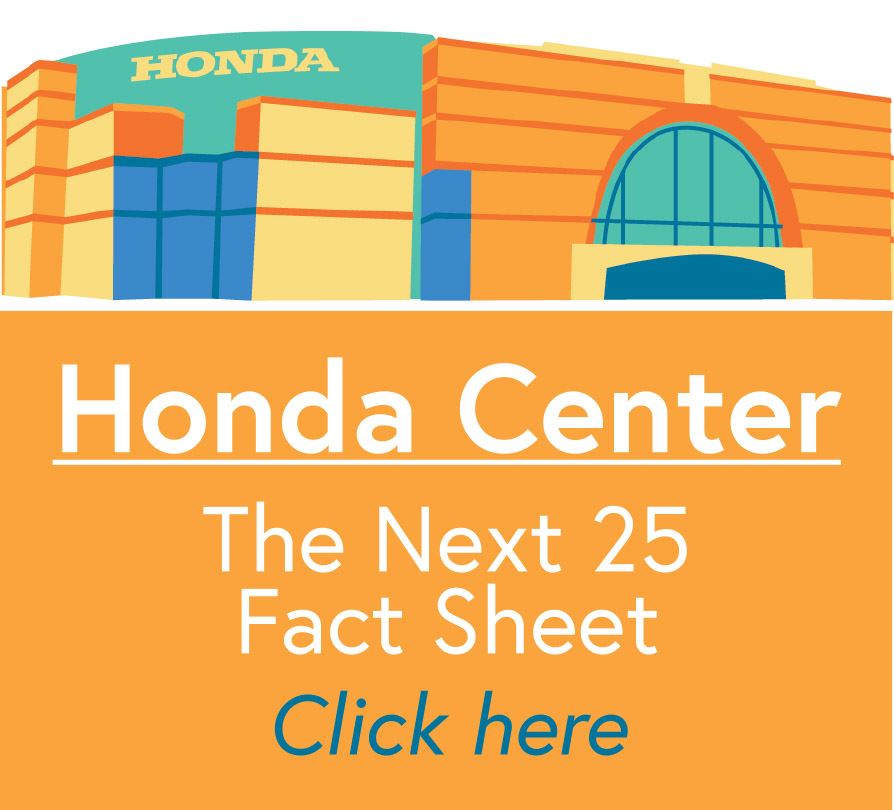 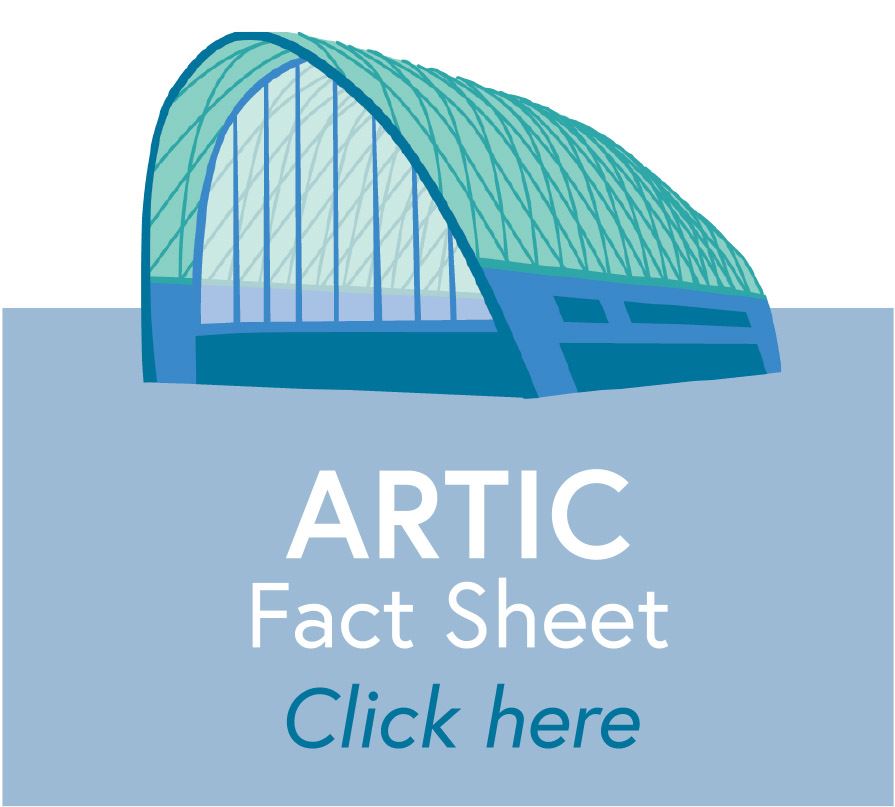 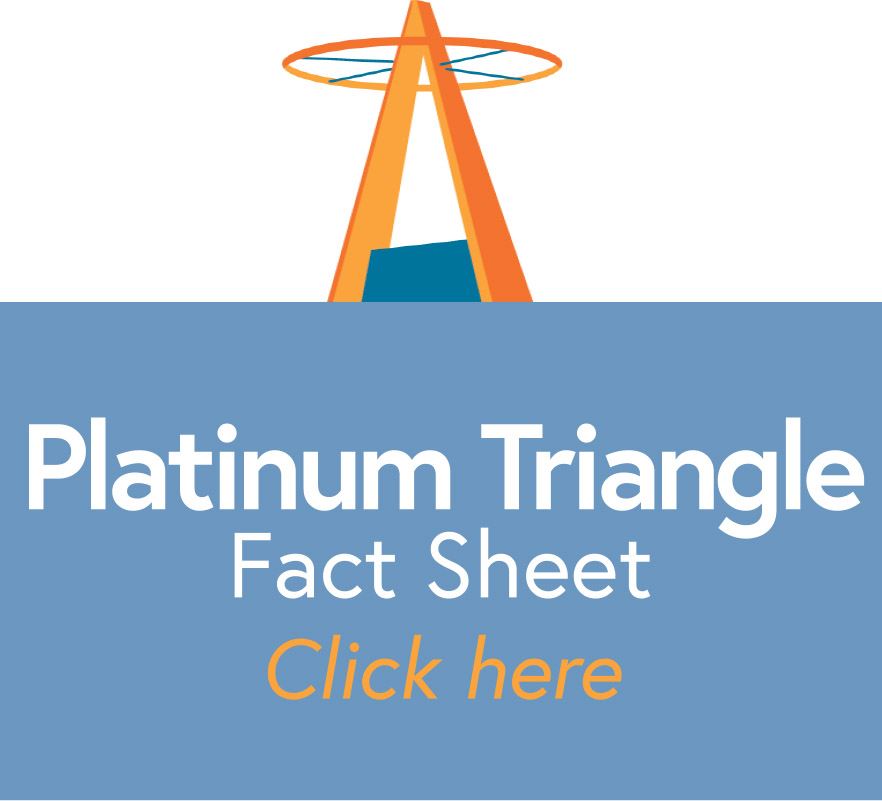 What is Honda Center: The Next 25?

It’s shorthand for agreements between the city of Anaheim and Anaheim Arena Management LLC, owner of the Anaheim Ducks and operator of Honda Center.

What is the status of these agreements?

We shared details with the community through social media and through coverage in the Orange Country Register.

We have been talking with Anaheim Arena about this for all of 2018. Our City Council gave initial direction in January and has been briefed on progress regularly since then.

What does this mean?

In short, another generation of great hockey and the best entertainment in Orange County at Honda Center.

Approval of the agreements also brings more revenue to the city of Anaheim to put toward public safety, parks and community services.

The city also has the ability to share in revenue from Honda Center and profits at ARTIC.

We also will be freed of $2.5 million Anaheim pays each year to cover a gap in expenses and revenue at ARTIC, as Anaheim Arena would take over budget operations for the transit center.

That ultimately frees tens of millions of dollars for us to use on parks, libraries, services and public safety in years to come.

Were the Ducks going to leave?

No. Anaheim is the only home the team has known, and it is a strong, successful hockey franchise here, celebrating its 25th anniversary in Anaheim in 2018.

This agreement merely solidifies the team’s commitment to Anaheim for an additional 25-plus years.

What does this mean for the Angels and Angel Stadium of Anaheim?

This is good for everyone in the Platinum Triangle — the area that's home to the stadium, Honda Center, ARTIC as well as homes, restaurants, entertainment and workplaces.

Our work on Honda Center: The Next 25 shows our commitment to professional sports in Anaheim. We look forward to talking with the Angels about building on five decades of baseball in Anaheim.

What changes will all of this bring?

We’ll see more great hockey, and hopefully another Stanley Cup as the Ducks won in 2007.

And, over the course of next 25 years, it’s possible that Anaheim could host the National Hockey League’s annual All-Star Game.

Then there will be more of the best concerts, visiting basketball and family entertainment that Honda Center is known for.

Anaheim Arena would continue to invest in Honda Center, as they have for the past two decades.

With the sale of land around Honda Center, we could see new, cool things around the arena.

Think of the kind of excitement you see around Staples Center with L.A. Live, at Golden 1 Center in Sacramento or around baseball stadiums in San Diego, San Francisco, Seattle and St. Louis.

ARTIC will continue to serve as a transit center for all of the Platinum Triangle, Anaheim and the region.

We will now look to Anaheim Arena to bring the management expertise we see at Honda Center to ARTIC with improved operational efficiencies from operating two adjacent city-owned facilities.

Long term, ARTIC will play an increasingly important role for daily commuters and visitors to Honda Center and Angel Stadium of Anaheim.

Anaheim Arena’s operation of ARTIC will also free the city of Anaheim of about $2.5 million annually we contribute to offset a current shortfall in revenue at the station.

Anaheim Arena will look to bolster ARTIC’s finances through operational efficiencies with Honda Center and expanded sources of revenue including from a digital display alongside the 57 freeway.

Anaheim Arena already sells ARTIC advertising under an agreement approved in March 2017, and a new display will build on that.

How will the city land sale impact parking?

Anaheim Arena already does a great job managing parking for an arena that can house up to 19,000 people on any given day.

Management of Honda Center comes with a requirement to provide a minimum of 3,900 parking spaces. That continues under the new agreement.

How much is Anaheim selling the land for?

The sale price is $10.1 million. The price is appraised market value with the requirement to provide a minimum of 3,900 parking spaces.

The land sale agreements also include protection for the city to ensure that, once sold, the land can't be sold again for a profit without securing parking for the arena.

Why not see if someone else wants to buy the land?

It is hard to imagine anyone else buying the land. If they did, they would have to allow Honda Center to operate it as parking, with all parking revenue going back to Honda Center.

There’s little advantage for someone else in buying the land.

What kind of revenue will Anaheim get from Honda Center under these agreements?

The city will receive a significant, one-time proceed of $10.1 million from selling the land.

Should development occur on the land in years to come, Anaheim would see additional, ongoing tax revenue that we can use to serve our community.

We will also see significant savings in our yearly budget from no longer having to support operations at ARTIC, which currently costs us $2.5 million a year. That saved money will go back to serve our residents and businesses.

We also could share in revenue generated at Honda Center.

Under our current agreement, any net revenue beyond $12 million would see Anaheim receive 20 percent of that, with the county of Orange seeing 5 percent for its early role in helping make the arena possible.

Up to now, we have not shared in revenue directly from Honda Center as Anaheim Arena has used revenue to make major improvements to the arena over the years, which also benefits the city.

The new agreement provides an immediate 50-50 split of any net revenue beyond $12 million and in 2023 trigger a lower revenue-sharing threshold of $6 million.