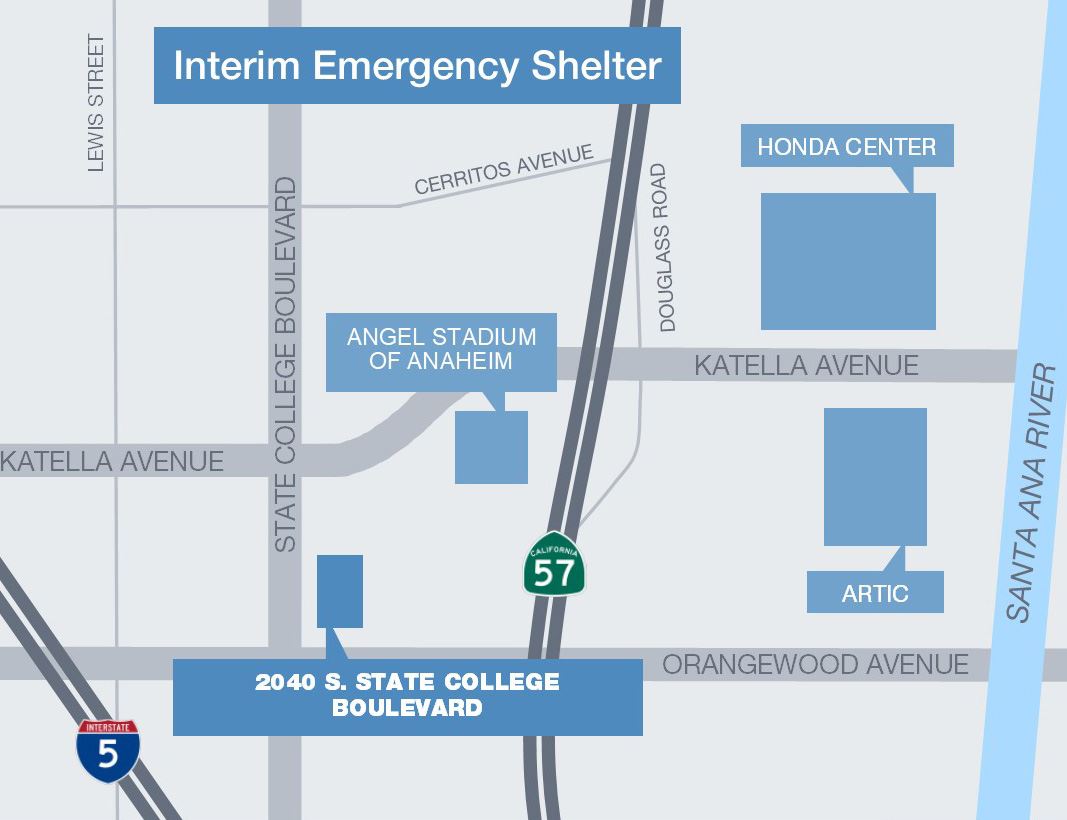 What was Anaheim’s interim emergency shelter?

Anaheim is required to provide 325 homeless shelter beds as part of a settlement of a federal lawsuit related to homelessness.

But that’s only part of it. We need to continue helping people out of homelessness and address the impacts we are seeing on our parks, neighborhoods and businesses.

This facility allowed us to do that quickly.

We have now succeeded in building 325 shelter beds at two other facilities in industrial parts of central and east Anaheim. They opened in January and February.

In the interim, we had seen things on our streets get worse. Our City Council took action in early December to make this happen so we could get people off the streets during the most vulnerable winter months and address issues at our parks, on our streets and in neighborhoods and business areas.

We received tremendous support from the business community to make this happen.

How long did this operate?

For 76 days until our other shelters opened. Those being sheltered there have now been transferred to our other sites. The building will now go back to how it was before.

Why in the Platinum Triangle?

This location was made available to us by Visit Anaheim Cares, the nonprofit arm of our Visit Anaheim, and other business partners who wanted to help address what is the most pressing issue facing Anaheim.

As an industrial building, it worked for a very short period of time and helped us address an urgent need for shelter space.

Did this just become gathering places for transients looking for a meal and shower?

We heard the same concerns before opening Bridges at Kraemer Place, a county-run shelter in industrial east Anaheim.

Those concerns have not been realized. Just as with Kraemer, this site operated under strict security and management.

We have too much invested in the Platinum Triangle and we ensured the shelter was a good neighbor.

Our goal was that you wouldn't even know it was there.

Who was there and how did they get there?

Our goal was to help people out of homelessness in our city while restoring public spaces that never were meant to be places for people to live.

The shelter served people we see on our streets every day. There are many reasons why people are homeless. Some are struggling with mental health issues, drug addiction, other health issues or have just lost a job.

All were able to come to this shelter as a first step on a pathway out of homeless.

Were people able to walk around the area?

In short, no, as part of rules to prevent impacts on neighboring businesses and communities.

Shelter residents were provided transit to productive appointments related to healthcare, work and other assistance to get out of homelessness.

As with any shelter, we could not prevent someone from leaving residency of their own freewill.

But we had plans in place for any who chose to leave to ensure they wouldn't be living on the streets in the area.

Who is Illumination Foundation?

Illumination Foundation is one of Anaheim’s partners addressing homeless.

It is a nonprofit based in Orange that provides outreach, case management, medical care, mental health and workforce services, emergency, transitional and permanent housing.

The group runs 16 shelters and other facilities in Orange County, Los Angeles and the Inland Empire.

We have worked with Illumination Foundation on homeless outreach in Anaheim schools and on supportive housing in our city.

Many people on the street don’t want help, so why add beds?

It’s true, there are some who regularly turn down our offers of help.

But, looking at all those we have helped, we know many people out there do want assistance, and sometimes it takes a few times to get through.

Plus, whether someone takes up our offer of shelter or not, we need to have a viable option for them before we can turn to enforcement in the cases where it may be warranted.

How was this be paid for?

Anaheim allocated $1.4 million to create and operate the shelter.

Our business partners offered to help with funding and other services, and we welcomed that to offset the cost of the shelter.

This was a significant financial commitment we didn't take lightly.

But, given the impacts on our parks, neighborhoods and businesses, we know this was necessary and was money well-spent on behalf of those who live and work here.

Why aren’t other cities doing more to address homelessness?

Others are, including Santa Ana, Orange, Buena Park and Costa Mesa. These cities alone have pledged to add more than 500 beds in the coming year or so.

All Orange County cities face the same challenge by federal Judge David Carter to address homelessness in their communities and will have to deal with the issue.

Cities that have not yet committed to adding beds, including in South County, are now coming under federal court expectations to add shelter beds as part of a countywide response to homelessness.