Living in the hills of east Anaheim is great. But with it comes risk from wildfires, earthquakes and hillside runoff.

As we saw with Canyon Fire 2 in 2017, there are times when you'll need to leave your home to safeguard yourself and your family.

We'll be there to help. Anaheim has a comprehensive evacuation strategy should we need to get people out during a wildfire or other emergency.

Below, you'll find maps showing how we will move people out. While our plan is in place, we're still refining the maps on this page and that we'll be sharing with the community. So stay tuned for updates.

Now, every emergency is unique. These are general plans that could shift as conditions change. As always, follow directions from police, fire and other city personnel in an actual emergency evacuation.

And while we have a plan to evacuate, know that you're still likely to encounter some congestion in an emergency. That's a given if we are moving thousands of people out of an area at once.

But knowing where to go and what to do will make leaving in an emergency easier.

We also need you to do your part. We ask everyone in the hills to know their primary evacuation route plus two or three other routes in case roads are closed or conditions change.

But start by looking at our primary evacuations route map and figure out what would be your primary and secondary routes.

You can also hone in our your neighborhood and local evacuations routes with the breakout maps that follow.

These routes are based on major streets — Weir Canyon, Fairmont and Santa Ana Canyon and others. You'll want to familiarize yourself with your particular neighborhood and know your way out to get to these streets.

You should know a primary, secondary and even a third way to get out of your neighborhood.

In most cases, we'll be looking to evacuate people in a western direction. For many people, that means you'll first travel north to get to the Riverside (91) Freeway.

There are some cases you might go east for a short period but just to get on the freeway to go west.

Those who live south of Canyon Rim Road will be directed south for a short period of time before going west.

Our first goal is to get you out of harm's way in a fire or other emergency.

We'll have evacuation centers set up where people can go.

Students are set to be evacuated to Orange High School to avoid creating congestion in east Anaheim.

As it stands now, horses and livestock will evacuate to the Orange County Fairgrounds or other stables in the area. We are in the process of further developing our livestock evacuation plans with the county and neighboring cities. Please stay tuned for updates.

If you live in east Anaheim, you should have your own emergency evacuation plan. You need to know what to do if you had to leave at a moment's notice, if you're at work, if the kids are at school, if you have an elderly relative or pets at home.

Know your way — and what you'll do in an emergency. 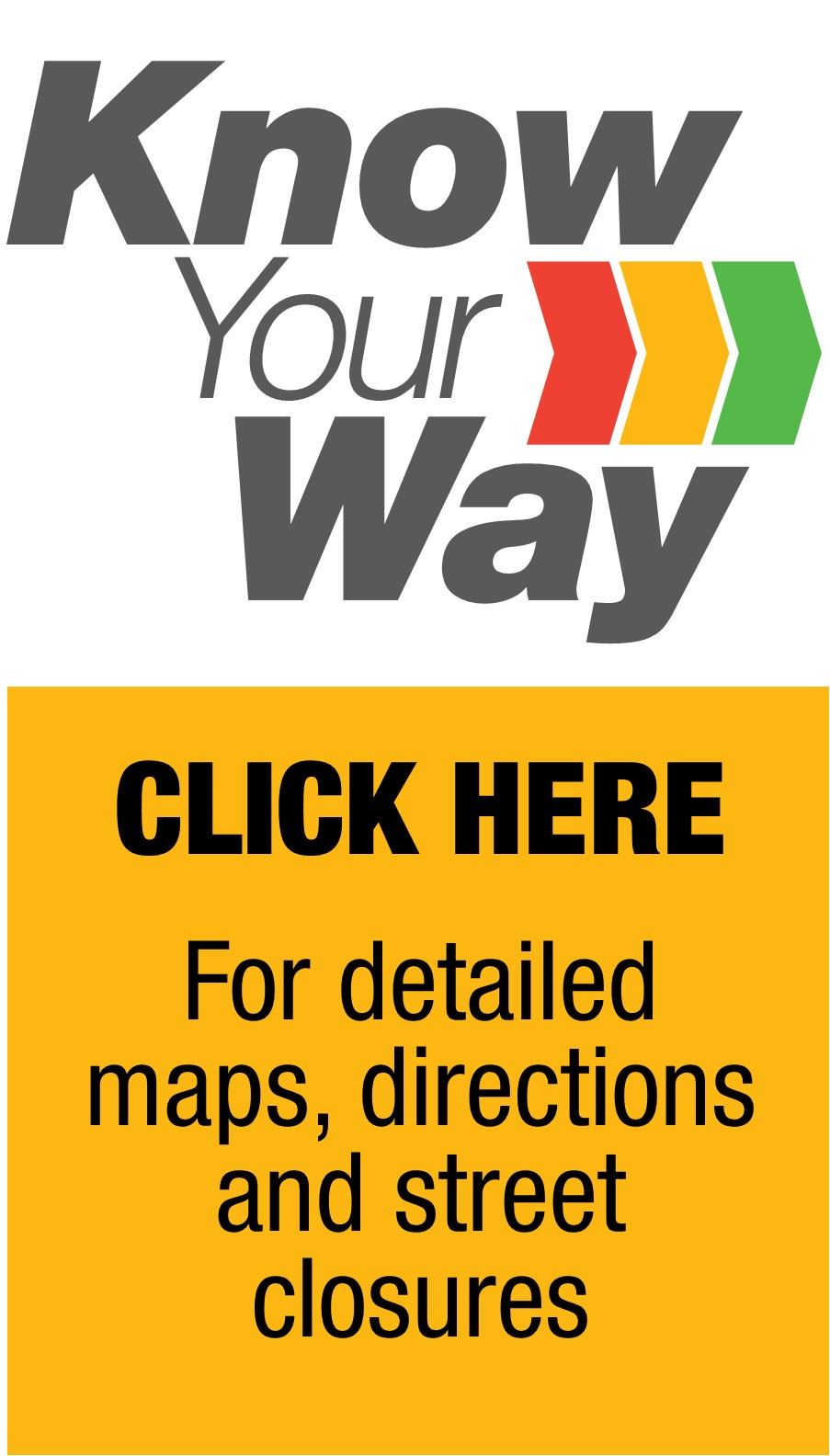 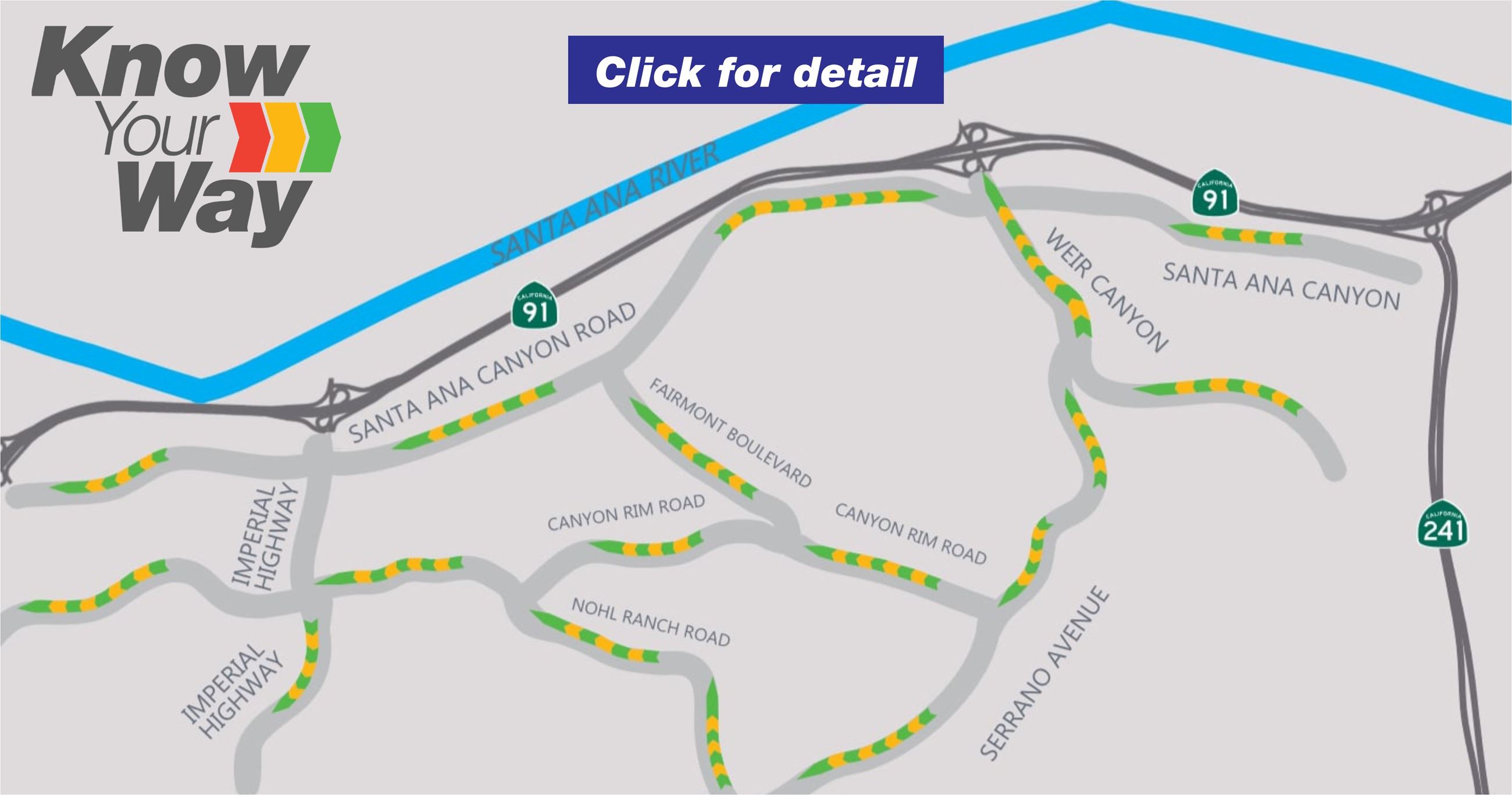 This overview map shows several identified evacuation routes all on one map. You can click for more detail.

The westbound Riverside (91) Freeway will be the primary way you and your family get out. You'll get to the freeway via major streets and to major streets via smaller roads.

The green and yellow directional paths on the map show routes of travel.

In most cases, you'll go north to the 91 freeway.

In other cases you'll keep traveling west on major streets out of east Anaheim.

Depending on where you live, you could go south before heading west into Orange.

In select cases, you may briefly travel east. If we send you east, don't worry — we're not sending you into the fire, just to the freeway.

Depending on where you live, you can hone in on a section of this map to see the best routes for you as well as road closures and other detail.

Below are breakout maps for the three sections of this overview map. 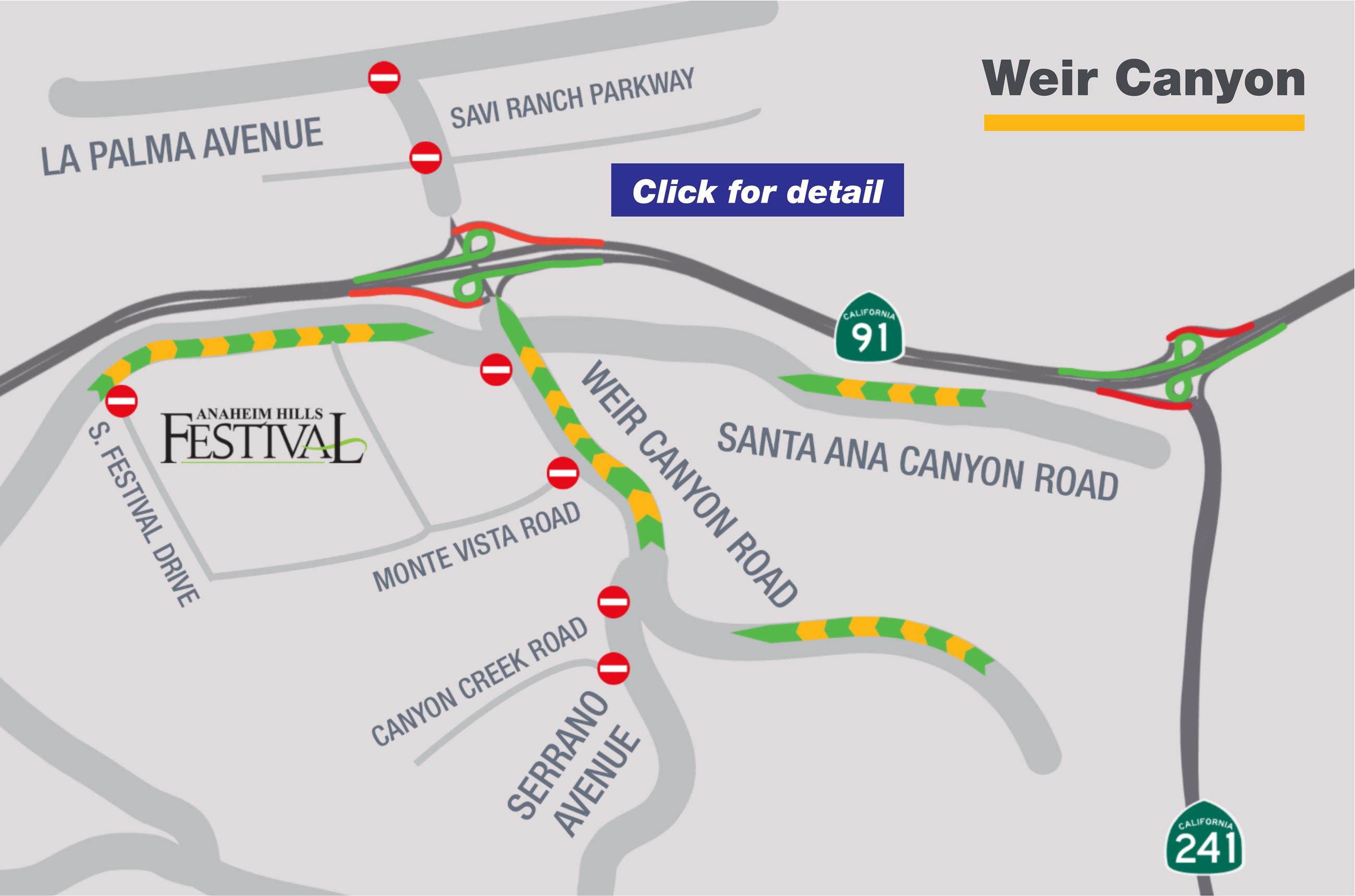 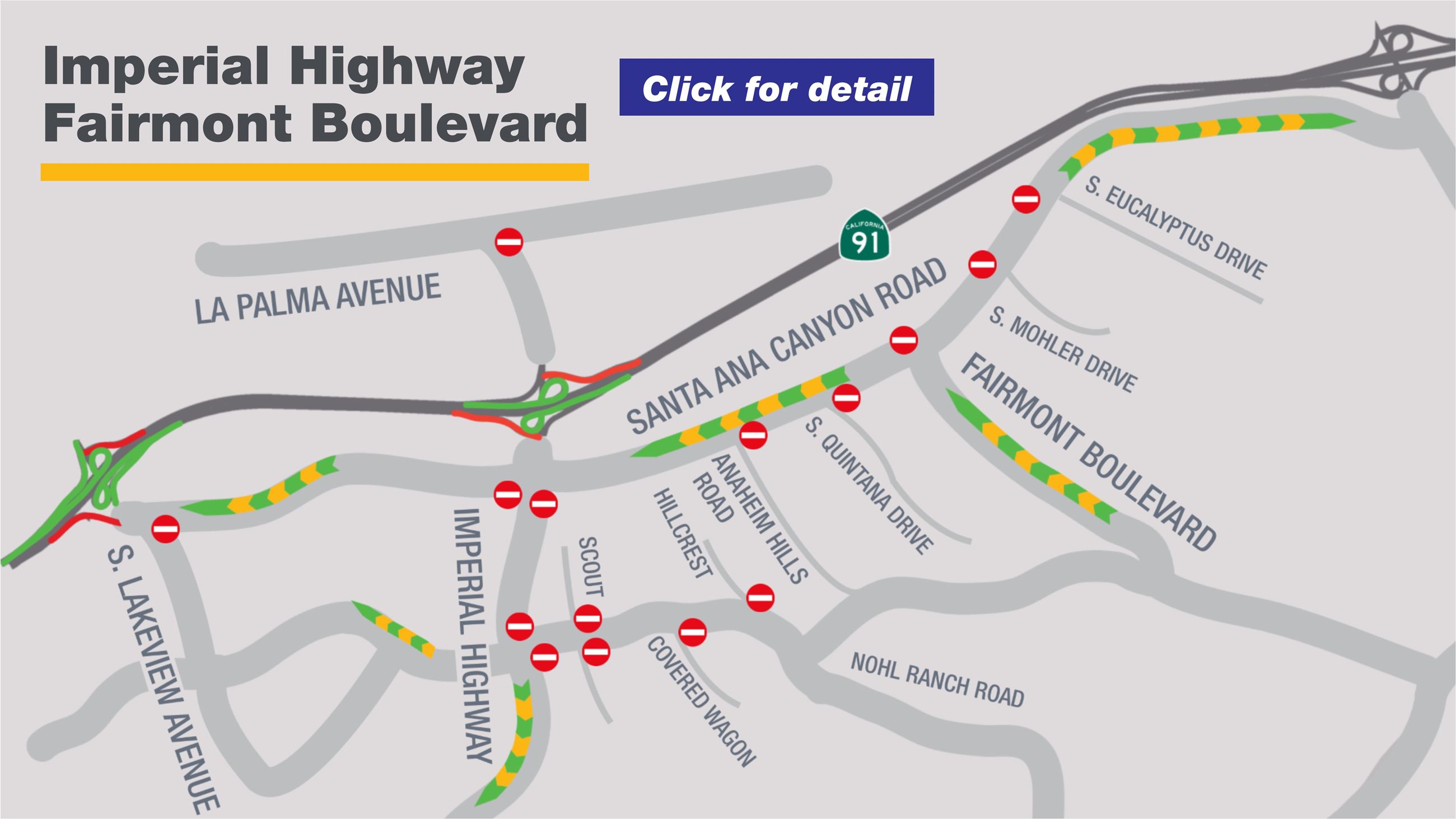 Residents living near Imperial Highway and Fairmont Boulevard will evacuate via Fairmont to the north and Santa Ana Canyon Road, either to the west or east.

Residents closer to Imperial will leave via Imperial, turning east on Via Escola or along Santa Ana Canyon Road to head west.

Note: we won't be using Imperial to access the 91 freeway, unless conditions dictate. 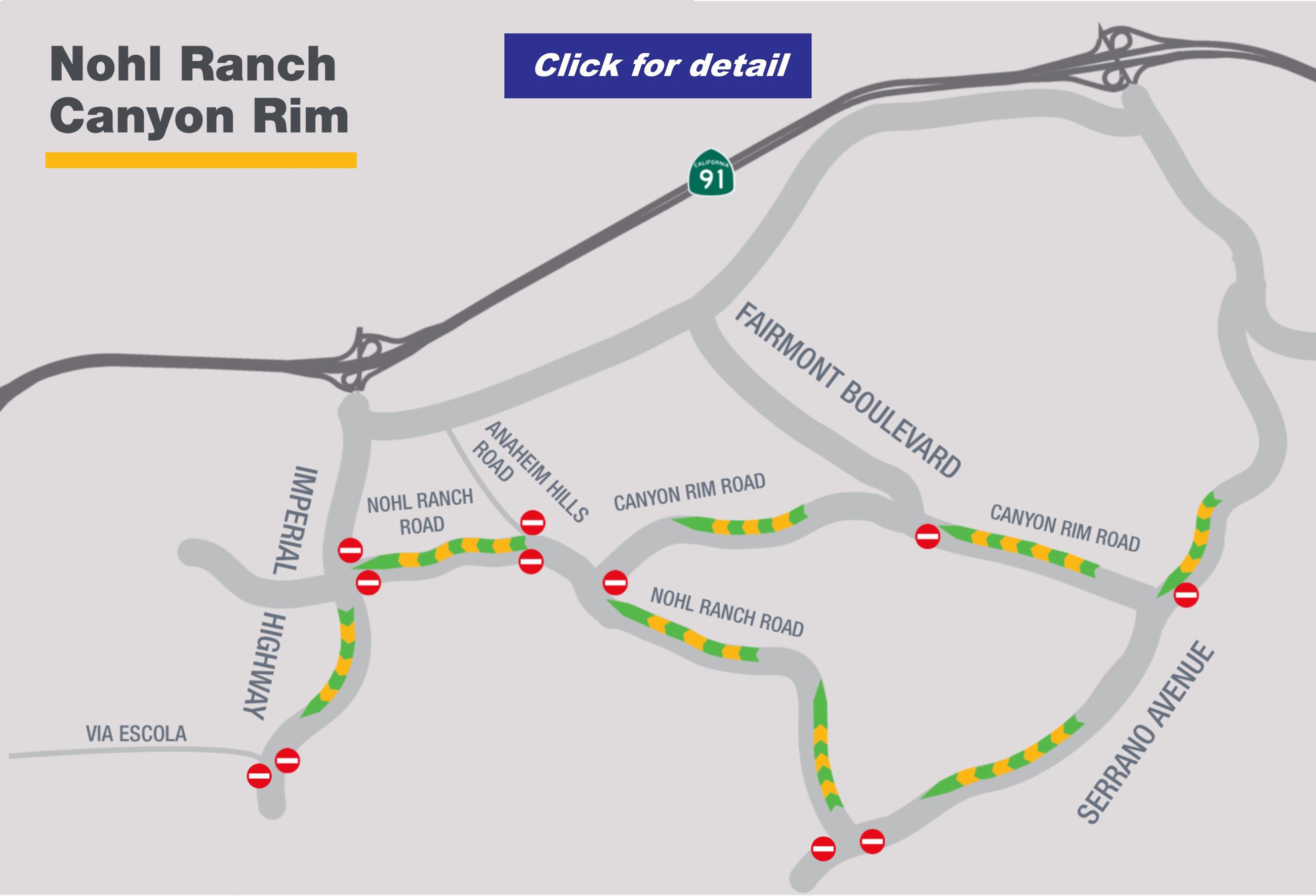 Residents in the south section near Nohl Ranch Road and Canyon Rim Road will be directed west at the earliest opportunity to avoid going into the city of Orange.

For some, that may mean going south on Serrano before turning northward onto Nohl Ranch Road.

If you live near Imperial Highway, you'll travel south before going west on Via Escola.